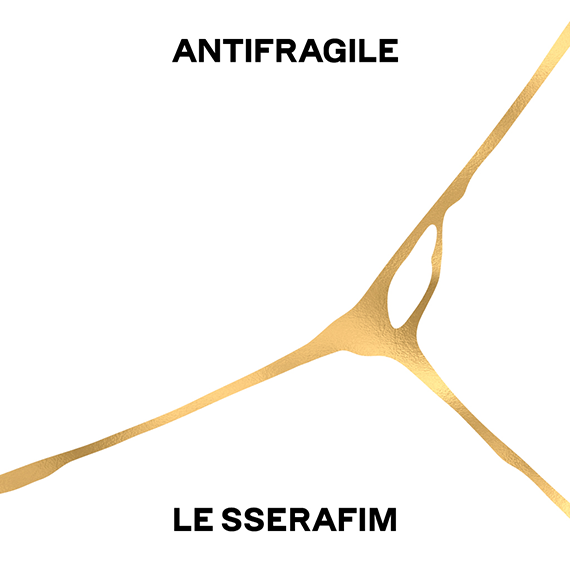 “We Can’t Be Broken”: How LE SSERAFIM Faces Adversities
LE SSERAFIM is back, and they’re raising their voices louder and stronger than ever to stand up against everything life can throw at them.
The group’s new album opens with their infallibility guarantee, “The Hydra,” followed by the title track, “ANTIFRAGILE,” that reveals the kind of strength of character that lets them repurpose hardship as an impetus for growth. Midway through the mini album, “Impurities” shows that the girls embrace everything about themselves, wounds and all, while “No Celestial” signals their intention to shed away images of angel wings in favor of living a down-to-earth life like everyone else. Rounding off their sophomore release is “Good Parts (where the quality is bad but I am),” an ode to the imperfect, sometimes pedestrian traits that make up a part of who we all are.
Equally impressive is the album cover, a visual representation of the messages explored throughout ANTIFRAGILE.
The design features gold crevices running across a black background, a nod to kintsugi art and its method of accepting the imperfections of broken ceramics by preserving the telltale signs of their fragility. Outside forces bent on breaking the mind are ultimately no match for the members of LE SSERAFIM, who will continue to hold each other up until they become an even better version of themselves.